We would like to welcome you to the fall 2016 edition of the Preservation Iowa new letter. We are glad to have you join us in staying up to date with a several important events that are upcoming and also those which have already occurred. We will be introducing topics of interest for the 2016 Country School Preservation Conference and 2016 Mini-Grant, Preservation initiatives around Des Moines, follow up on the 2016 Preserve Iowa Summit and the Preservation at its Best Awards Ceremony, FY2016 State Historic Rehabilitation Tax Credits, and more.

The year has been filled with forward motion for historic preservation in Iowa. Changes in the State Historic Tax Credit program have been generally very positive. The State of Iowa continues to fund State Historic Preservation Tax Credits with nearly 33 million dollars allocated in 2016-2017.

Preservation Iowa has continued to successfully reach its members and communities through a new and much improved preservation Iowa Website, Newsletters, grant programs, and other resources.
The conventional wisdom is beginning to regard the ethic of restore, revitalize, and reuse historic structures in Iowa. Gradually we see communities embrace this idea over new construction.

The statewide Preservation Summit held in Davenport, Iowa was well attended and included excellent content as well as wonderful social opportunities. Very good work by the staff at the State Historic Preservation Office, Preservation Iowa, and the host community of Davenport.

As I have visited with folks around the state of Iowa I am always pleasantly surprised how much work is being successfully accomplished under the banner of historic preservation. Iowans really are quietly leading the way in this arena.

There are many issues to be addressed and much work to be done in Iowa. Preservation Iowa and its members would like to see the following issues advanced next year.

These and many other items are on Preservation Iowa’s agenda for the next 12 months. Won’t you please join forces with us by becoming a member and by being an advocate for preservation efforts in your communities.

Preservation Iowa will plan to give awards, to recipients of the January 2016 allocation, for the second round of its Mini-Grant at the historic country school house conference.

We will be releasing more detailed information to attendees at that time about the January 2017 allocation of funding. Preservation Iowa plans to release a call for nominations and application to the MiniGrant on October 17, 2016. You can also find out more about this new initiative by contacting Preservation Iowa at director@preservationiowa.org. 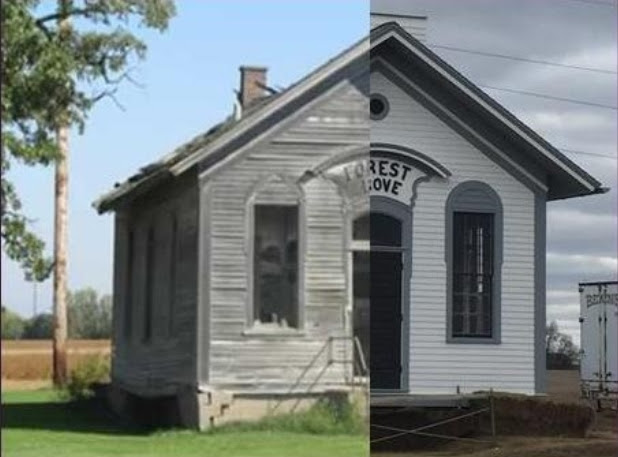 New books have been written.  Major school preservation projects are underway and a new goggle map showing the locations of current and past country school locations in Iowa has been created.

The two hot spots for country school preservation are in O’Brien county and Scott County.

An 89 year-old preservationist-Harold Tuttle—has created the first country school four-plex in Iowa.  He has coordinated the move of four one-room schools and has created the Prairie Arts Historical Park on the edge of Sheldon to house the schools.

Joining Tuttle in the effort to preserve country school history is a 17-year-old high school senior—Wesley Peters.  He has produced the latest county history of rural schools: “These Four walls: The History of O’Brien County Rural Schools.” Peters did extensive interviews, library research and reviewed historic maps to produce this publication. Peters has also created a Google map that marks the location of more than 3,000 school building in Iowa.

There have been approximately 20 county country school histories compiled in Iowa.  Work is underway for this type of history in Hancock, Johnson and Lee Counties.

Sandra Host of Council Bluffs has produced a statewide history:  “Iowa History of the One-Room School 1870-1950.”  Host is the author of the Iowa rural Schools Museum in Odebolt.  Her book is beautifully illustrated with four-color photos of country school artifacts.  It would be a valuable resource for anyone who has or is restoring a country school building.

In Scott County two women are leading the way with country school preservation.  Deborah Leistikow is the site manager of the Walnut Grove Pioneer Village supported by the Scott County Conservation Board.  Leistikow has created a new history for the Walnut Grove building, which became one of the first school museums in Iowa.  This 19 building complex is largest historical village in Iowa.  It is located near Eldridge.

A few miles away near Bettendorfs, Sharon Andresen is coordinating efforts to restore the Forest Grove School.  She has helped raise more than $100,000 to bring this abandoned school back to life.

The Iowa premier showing of new barn preservation documentary will be held at the Johnston Public Library on Saturday Nov. 5 at 2p.m. The program called “The Barn Raisers” was produced by Fourth Wall Films based in Moline, Il.  The program describes efforts to preserve barns in Iowa, Michigan, Ohio and other midwestern states.  The Iowa showing is sponsored in part by Humanities Iowa.  There is no charge to attend. The Johnston Library is located at 6700 Merle Hay Road approximately two miles north of the Interstate 80 Merle Hay Road exit near Des Moines.

Preservation Iowa Board Member & Assistant Professor of Community and Regional Planning at the College of Design, Iowa State University

Historic preservation education has a long history at Iowa State University, perhaps longer than many people realize.  Preservation classes have been offered here intermittently for three decades.  Most of these were taught by architecture faculty and focused on materials and technologies, and introduced students to the rehabilitation and adaptive reuse of historic buildings with the Secretary of the Interior’sStandards in mind.  Professor Arvid Osterberg’s class “Preservation, Restoration, and Rehabilitation” is emblematic of this.  First taught in the mid-1980s, he continues to teach this popular class today.  Many other preservation classes in various departments are now in the course catalog and more will come.

The Iowa Department of Cultural Affairs announced that more than $32 million in historic preservation tax credits have been registered for 14 different projects in eight communities across the state for fiscal years 2016 and 2017.

2023 Preservation at its Best Nominations Open

Most Endangered 2023 Call for Nominations EXTENDED

2021 Preservation at Its Best Nomination Form